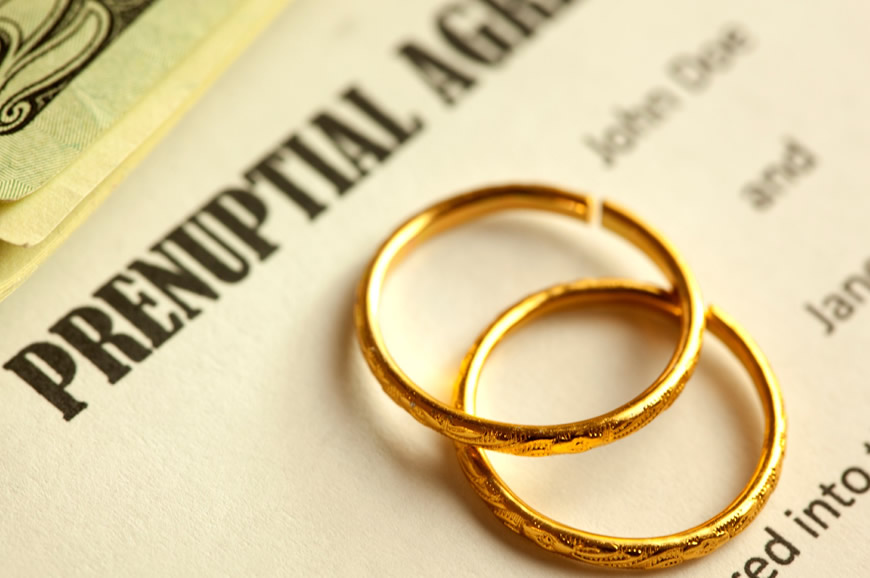 For those contemplating marriage, an ante-nuptial, also referred to as a Pre-Nuptial Agreement may be the way you might want to enter into the marriage contract.

WHY SHOULD YOU SIGN A PRENUPTIAL AGREEMENT? TO TAKE CONTROL

BUT ISN’T A PRENUPTIAL AGREEMENT UNROMANTIC?

No-one plans on their house burning down, ending up in a nursing home or suffering a disability but they still take out insurance. As Dr. Ruth says: “We live in such a litigious society. Nobody knows what life brings. Hopefully we will never need it. What’s the big deal? Let’s do it and give it to the attorneys…for the new millennium, a prenup is part of a mature relationship, based on love, mutual trust and optimism.”
“He therefore who lacking of his due in the most native and human end of marriage, thinks it better to part then to live sadly and injuriously to that cheerful covenant (for not to be belov’d & yet retain’d, is the greatest injury to a gentle spirit) he I say who therefore seeks to part, is one who highly honours the married life, and would not stain it: and the reasons which now move him to divorce, are equal to the best of those that could first warrant him to marry; for, as was plainly shewn, both the hate which now diverts him and the loneliness which leads him still powerfully to seek a fit help, hath not the least grain of a sin in it, if he be worthy to understand himself.” John Milton, 1664 “The doctrine and discipline of divorce.”

Couples who have contemplated divorce in the past should most likely seek a Post Nuptial Agreement, so that in the event of a divorce they will have a somewhat predictable outcome as to what their financial future may entail. A post nuptial agreement is entered into after a marriage and each partner in the marriage agrees to a contract the will outline who gets what in the event of separation or divorce.

UNCONTESTED DIVORCE – THINK YOU CAN DO IT BY YOURSELF? DO YOU NEED A LAWYER?

You may have overwhelming feelings of guilt if you are the one breaking up the marriage, or you may be on the other side – and feel hatred or bitterness toward your spouse for breaking up the marriage. Either way, a divorce is extremely emotional for each party involved. These feelings can cloud your judgment, and when it comes to your future, the future of your children, and your money – you cannot afford to go it alone.

BUT THIS SHOULD BE EASY, WE AGREE ON EVERYTHING

While going through a divorce may not be easy, but by deciding to use Estate Planning Legal Center, APC it can be less costly. If you and your spouse are in agreement as to how you are going to divide your property and about issues relating to your children, you can file an uncontested divorce. If you do not own any real estate, the procedure is known as a Summary Uncontested Divorce.

If real property is not involved, which means either both of you together, or you, or your spouse alone own real estate, however, you may still be able to file what is called an Uncontested Divorce.

It is especially important to retain a lawyer if you:

DISSOLUTION OF MARRIAGE/ aka: DIVORCE

Before beginning the divorce process, you should think about its effects on your life. If after careful consideration you have determined that this is the direction you want to take then call the Estate Planning Legal Center, APC to schedule an appointment for a free consultation.
In San Diego, California, our courts do not recognize common law marriage, which is without a ceremony or a marriage certificate. San Diego, California does recognize same-sex marriages, which are referred to as Domestic Partnerships. When we discuss terminating a marriage we are also referring to terminating a Domestic Partnership.

Before you can file for a divorce in San Diego County, you or your spouse must have lived in California for at least six months, and in the County where your divorce is being filed for at least three months. If you do not meet these minimum requirements, please call the Estate Planning Legal Center, APC to guide you around this obstacle.

IF I DIVORCE, WHAT AM I LEGALLY ENTITLED TO RECEIVE?

California is a Community Property State. California looks at the two people that married as one community. It does not mattered who worked more, who spent more, who charged up their credit cards, who stayed home with children, etc. In the end the two of you are one community. Every move each spouse makes in on behalf of “the community.”

Many spouses, especially if they are the breadwinner – believe that if they earned the money through their education, skills and/or employment, then that makes the earnings theirs to keep. They are wrong. They are wrong – because in California it does not matter who earned what, why or how. It only matters that if anything was earned during the course of the marriage, regardless of the party that earned it, it was earned for the benefit “the community.” Many times this is where a divorce will get ugly; one spouse usually feels entitled to more that the law states.

What is Community Property?

Community Property means that all assets and debts acquired during the course of the marriage are to be split 50% to the wife and 50% to the husband. This is the law.

What is Separate Property?

Separate Property is any property that is yours alone. This is property that was acquired before you were married and property that you kept separate. Property you received by inheritance or as a gift, even a gift from your spouse makes this gift your separate property. In order for your separate property to remain separate you must keep records of it. You must be able to show that you had it before you were married. Lastly, you must keep it traceable if you use funds for the good of the community – you and your spouse. Beware- debt acquired before the marriage is also separate debt.

WHAT ABOUT BUSINESSES, INVESTEMENTS, THE SCHOOLING OF A SPOUSE, USING SEPARATE FUNDS TO PAY COMMUNITY DEBTS?

All of the above and many more obstacles are some of the many reasons why a divorce proceeding may take many months to resolve. Each one is a factor that may change the outcome of your financial future. there are too many to go into detail, but it is worth your time to research this and speak to a lawyer regarding your rights in a business, investment, reimbursement of tuition paid, were separate funds a gift to the community or do the funds get paid back to the spouse where they originated.

WHY ARE YOU DIVORCING? DOES IT MATTER?

It doesn’t matter why you have decided to divorce. You do not have to give the court a reason to get a divorce. Most divorces are granted based on irreconcilable differences and that these are irremediable.

A divorce is the most common method of terminating or breaking the marriage contract. In San Diego, California, divorce is officially called dissolution of marriage. We use the words divorce and dissolution of marriage interchangeably; however, they have the same meaning.
When parties divorce, the court will declare the marriage contract broken.
The court will usually do the following:

WHAT IS THE DIVORCE PROCEDURE?

This is the basic 5-Step Process (bare-bones), but there are many more forms and exchanges in between these steps.

*Please be advised that many times the parties cannot agree and there may be interrogatories going back forth, motions to compel, subpoenas served on each other, business entities, and employers, etc. The whole process can last from six months to years depending on your situation and how well each spouse is inclined to work fairly and honestly with the other spouse to resolve any differences.

WHY USE THE LAW OFFICE OF DIANE HAISHA-DEFOREST?

Horror stories abound of lawyers charging substantial fees with little progress to show for it, or purposely engaging in adversarial behavior to prolong a case with little effort put forth to resolve the matter. Many lawyers hesitate to come seek an agreement between the parties which will preserve the couple’s estate. At the Estate Planning Legal Center, APC we will work to resolve the dissolution of your marriage in a timely manner, while keeping you informed every step of the way. We don’t seek to prolong your case or pit spouse against spouse as this is never in the best interest of the client. We will work with opposing counsel to amicably dissolve your marriage if at all possible to do so.